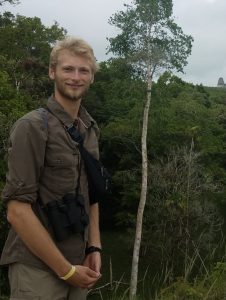 Jacob Podesta – his interest in social insects began with social wasps, studying how the behaviour of paper wasps changes to be more cooperative with age (with Dr Serian Sumner at the University of Bristol) before moving on to work for his Masters, with the European rock ant, Temnothorax albipennis, investigating the tandem-running behaviour that these ants use to transfer information between individuals. Following this, he worked in public engagement in science with Bristol Zoological Society, but maintained an active interest in social insects. He then worked as a naturalist in Central America researching orchid bees. He studied the altitudinal variation in orchid bee diversity and contributed to an updated range for several species.

Through this, he moved away from studying behaviour and into ecology, returning to academia to begin his PhD. His current work at the University of York looks at the two-way interaction between mound building ants and the environment using plantation forests as a model. So far, he has investigated how wood ants impact the soil and the spatial heterogeneity of below-ground resources and how the management decisions made by foresters impact wood ant populations.

While many ants are very effective at dispersal, with winged reproductives being able to fly to new locations and found colonies, some species have a different dispersal strategy. The British populations of the northern hairy wood ant (Formica lugubris) form vast networks of cooperating nests in many forests in Scotland and the North of England, challenging our idea of what a colony is. Rather than flying to a new area to found nests, mated queens will return to the maternal nests and search for a nesting site on foot with workers from the old nest. This makes their dispersal much slower than many other ants, despite high population densities. They are also edge specialists, nesting in areas where both trees and direct sun are available. As a result, their dispersal is potentially affected by local topography and the land management practices.

Using an expanding population of Formica lugubris in the North Yorkshire Moors, we explore the effects of the compass bearing of linear features, such as roads, paths, and fire breaks on the dispersal potential and population of wood ants. In high latitudes, the bearing (relative to north) of linear canopy gaps will determine the amount and pattern (spatial and temporal) of light availability, which will affect the wood ants in the understory below. Using nearly 10 years of population margins mapping data in conjunction with recent data collection, we attempt to understand how the land management and forestry practices have facilitated or hindered the expansion of these populations, and to what extent the wood ants’ current distribution on the North York Moors has been influenced by past forestry planning decisions.